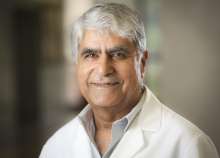 Later on this year, Experimental Pathologist Saeed R. Khan, Ph.D., will be bestowed a Lifetime Achievement Award by the International Urolithiasis Society, recognizing his exceptional lifelong scientific work in the field of urolithiasis. The award will be presented to Dr. Khan at the 13th International Symposium on Urolithiasis from July 19 to 22, 2016, in Makuhari, Japan.

This is an exciting honor for Dr. Khan to be acknowledged for his lifelong work. While the awards ceremony is still some months away, please join us in congratulating him on this award, which his career-spanning achievements.

Dr. Khan is an adjunct pathology professor for the University of Florida Department of Pathology, Immunology and Laboratory Medicine and a Finlayson Professor of Urologic Research at UF. In this role, he has served as a member and the chair of the supervisory committee of 31 masters and doctor of philosophy students, and has also mentored 18 postdoctoral fellows. Additionally, Dr. Khan is the director of the UF Benign Urology Training Program.

Currently, Dr. Khan’s work involves investigating various aspects of kidney stone disease, using in vitro and in vivo techniques, while focusing on cell response to oxalate and calcium oxalate, as well as calcium phosphate crystals. Since 1978, his research has been continuously funded by the National Institutes of Health (NIH). He serves on various research advisory and grant review panels for the NIH and the United States Department of Veterans Affairs, as well as research institutes located in countries across the globe.

Throughout his career, Dr. Khan has published more than 400 scholarly articles, including reviews, book chapters and nearly 200 refereed articles. He regularly reviews manuscripts for a number of scholarly journals and is currently an associate editor for the journal Urolithiasis (formerly Urological Research), the official journal of the International Urolithiasis Society. He has also edited a number of proceedings of international symposia on urolithiasis, in addition to a book titled Calcium Oxalate in Biological Systems.

Dr. Khan has organized two Finlayson Symposia on Urolithiasis at the University of Florida had significant involvement in national and international professional associations, serving as:

An experienced speaker, Dr. Khan has also given keynote addresses, and plenary and state-of-the-art lectures at conferences and symposia, both at domestic and international meetings across the globe.

For his outstanding career accomplishments, Dr. Khan has also received:

He is also featured in the Marquis Who’s Who in America.